Parkway Playhouse is located in Burnsville, NC. Established in 1947, the theatre is one of North Carolina's oldest theatre companies. 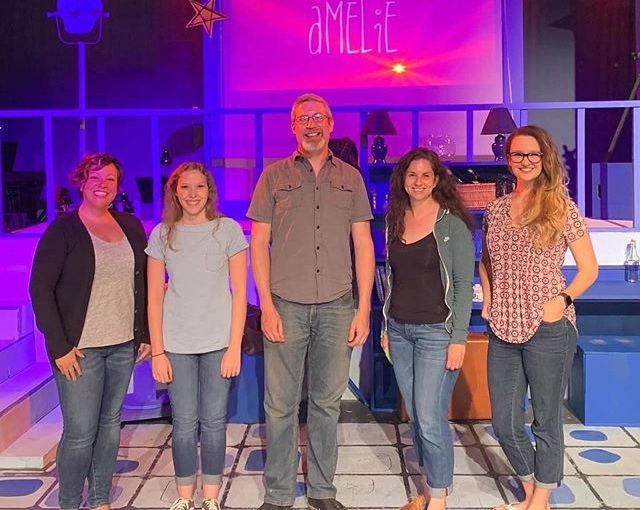 We are so lucky to have assembled one of the best group of musicians in the area for our production of Amélie! 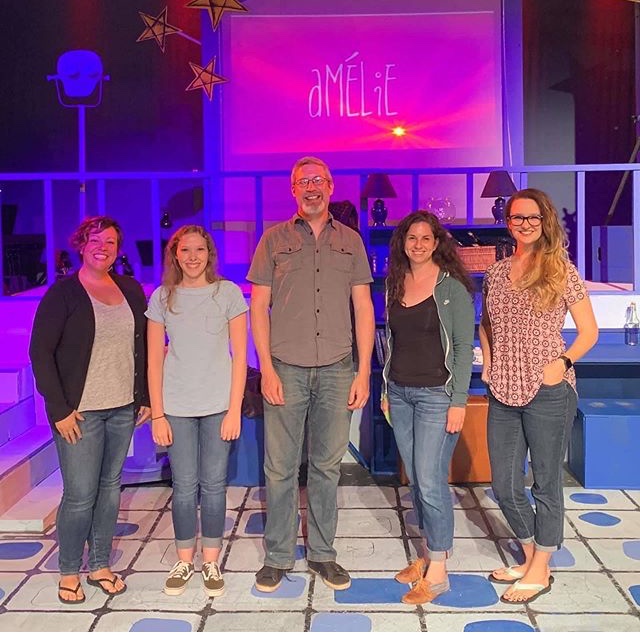 PPH: Tell us a bit about yourself!

Emily Eldridge: I play violin, and I am going into my sophomore year at Covenant College. I am majoring in music theory and have been playing violin for 8 years. This is my first time doing a musical, but I was in my school’s orchestra all through middle school, high school, and now college. I also played with the Asheville Symphony Youth Orchestra for 2 years, and I play in an ensemble every Sunday at First Presbyterian Church of Weaverville.

Sarah Fowler: I am the Music Director and pianist. I graduated with a Bachelors degree in Piano Pedagogy from Western Carolina University which is where I work, both in the School of Stage and Screen and in the School of Music. This is my sixth production at Parkway — previously I was the Asst. MD for ALL SHOOK UP and was the MD for BONNIE AND CLYDE, INTO THE WOODS JR., and GODSPELL. I also played several performances of FOOTLOOSE.

Sara Nichols: I grew up in Bradenton, Florida- but found out I was actually a mountain girl after attending Mars Hill University. I’ve been making music in WNC ever since on both upright and electric bass. You can catch me in one of the many regional pits or orchestras. This is my third show at the Parkway Playhouse.

Matthew Richmond: I’m a percussionist and composer, and I teach music at UNCA. This is my 4th production at Parkway Playhouse – previously I’ve done THE KING AND I, GODSPELL, and subbed a few nights of FOOTLOOSE.

Misty Theisen:  For AMÉLIE I am playing flute, bass flute, clarinet, and bass clarinet. I have a Bachelors in Music Education and a Masters in Flute performance from the University of Southern Mississippi. Currently, I teach woodwinds and music education at Mars Hill University. This is my second show at Parkway Playhouse, the first being BONNIE AND CLYDE. PPH: What has been your favorite part of the rehearsal process so far?

Eldridge: My favorite part of the rehearsal process has been getting to see and hear how the music goes with the story and everything happening on stage.

Fowler: Throughout the rehearsal process, you watch these talented actors develop their characters, and the final product going into tech is always great! But there is a subtle magic that happens on the night when they wear their costumes for the first time. You finally see their character come to life, and it is incredible how it transforms their vocal confidence. That is always my favorite part of the process. (Shout out to Samantha and her brilliant costume design.)

Nichols: My favorite part of the rehearsal process so far has been getting to actually watch the show! Due to an injury I had to take a night off playing and got to sit in the audience- something about being a performer is never getting to experience the show the way the crowd does. It made the showmake so much more sense.

Theisen: It’s amazing to see how a show coheres together and becomes moving piece of art in such a short time. The interplay between all the artists on and off the stage is such a magical process. 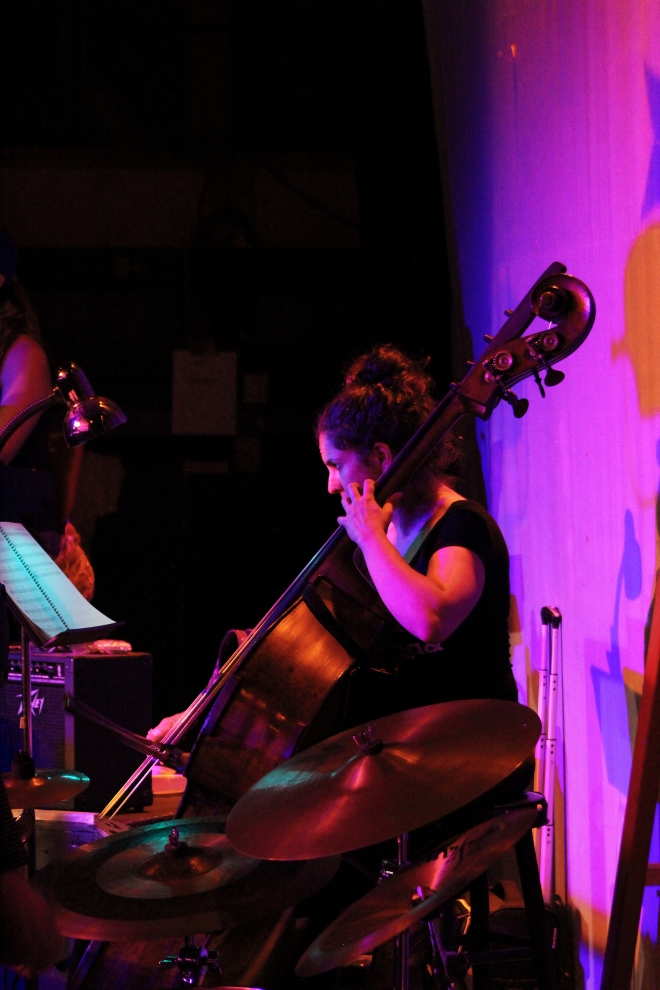 PPH: What is your favorite musical number in the production?

Eldridge: My favorite musical number in this production is “Where Do We Go From Here.”

Fowler: Even though this amazing cast has given me a reason to love every single song, my favorite is “Stay”, mostly due to the ensemble. They only sing a total of seven measures, but juxtaposed against the beautiful vulnerability that Amélie and Nino are bringing onstage, you feel every emotion in the room during those seven measures. It’s incredibly moving.

Richmond: “Stay.” It’s a simple and beautiful song that could stand alone, and in the context of a show about imagination its sincerity is very powerful.

Theisen: I truly love every minute of this gorgeous show, “Times are Hard for Dreamers” and “When the Booth Goes Bright” are my top two!

PPH: What do you like about performing/playing at Parkway Playhouse?

Fowler: The professionalism, organization, and communication are just three of the many things that I value and appreciate about Parkway Playhouse. I think the world of Kristen Livengood and admire what she has done for this theatre. To be perfectly honest, I love everything about Parkway and what it provides to its actors, its patrons, and to the community.

Nichols: AMÉLIE has been a great show to be a part of- Parkway Playhouse has a great team of people who think creatively and innovatively to get the job done.

PPH: Are you playing with any old pals (or new acquaintances)? How has that been?

Fowler: We have joked that we are living out the Six Degrees of Kevin Bacon game. Sara and I went to college together, so we have known each other for 16 years. Sara and Matthew play together in the Asheville Symphony. Matthew and I have played several shows together, the first being in 2015 which was also the first show that Misty and I ever played together. (Fun fact: AMÉLIE will be the 13th show that Misty and I have done together with 5 more upcoming.) She and I are former members and board members of the Asheville Community Band. When Emily was in middle school, Misty was her strings teacher. I have known Emily for the last 7 years because she plays in my church orchestra at the First Presbyterian Church in Weaverville where I’m the Music Director. Misty plays there throughout the year and for all of my Christmas and Easter programs, and Sara’s husband has played for me as well. Matthew will be playing there for the first time this Christmas. We’re all well-connected at this point!

Nichols: We also added a chicken that we’ve lovingly monikered “Princess Di-Henna”,  you won’t hear her say much, but she remains an integral part of our team. 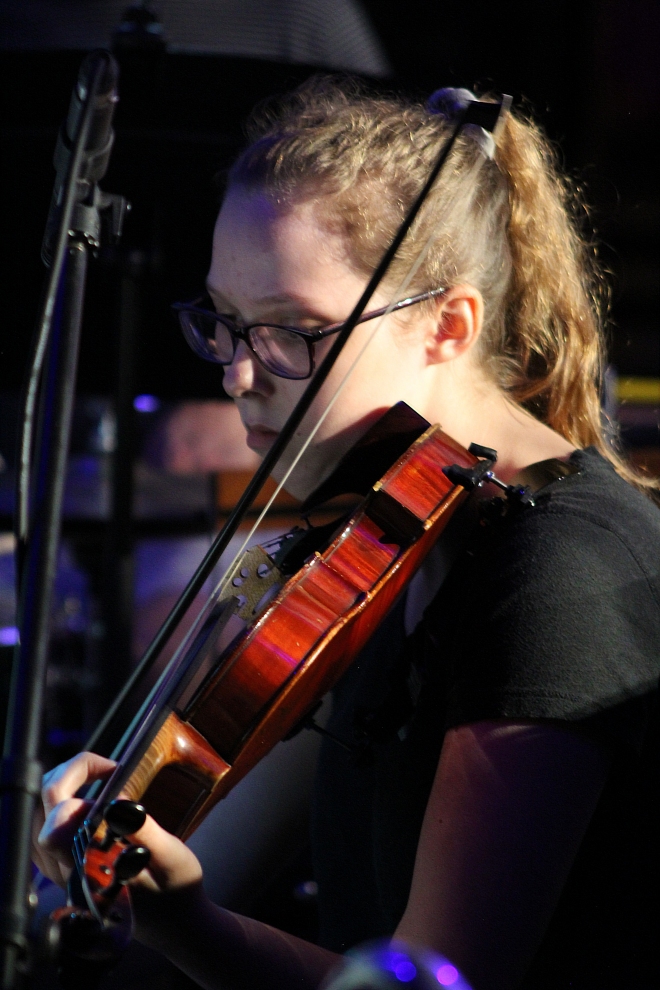 Fowler: Growing up, I lived inside of my head a lot and had a very vivid imagination — one of the reasons I can connect with Amélie. When I was a kid I had a beta fish named Cleo. I remember sticking my finger in her tank, and she would come to the surface and nibble at my finger while I talked to her. I one hundred percent believed that Cleo would talk to me if she could. In our show, William Ezzell (who is so incredibly talented) plays Fluffy, the goldfish. The first time I saw this scene come to life, I was immediately transported back to my childhood and to Cleo. AMÉLIE has a way of making you believe in youthful magic all over again, and that is unique. I’m forever grateful to my amazing friend, Dwight Chiles, for allowing me to be a part of these beautiful productions like AMÉLIE. He is one of the most creative, kind, and supportive humans I’ve ever known.

Nichols: I believe this is everyone’s first time playing THIS show. In circles of professional musicians its very rare to find that- it mean’s we all had the same learning to do, but also no preconceived ideas about who was supposed to be sounding a certain way.

Fowler: I love a show in which the plot is propelled through music, and AMÉLIE is one of those shows. Everything flows so seemlessly that you have no idea that over an hour has passed when the lights come up for intermission. The challenge with a show like this, other than physical and mental stamina, is making sure that everything you play lines up perfectly with what is happening on stage. It requires more looking at the action on stage than it does at the actual music.

Nichols: When I started the practice and rehearsals I thought I would be playing upright bass for this show- we wanted the warmer natural tones, but after a couple rehearsals an injury to one of my fingers forced switching to electric bass, which meant quick thinking to catch up on a different instrument.

PPH: What drew you to Parkway Playhouse or to this particular show?

Eldridge: When I was asked to play for this show, I didn’t know much about Parkway Playhouse or Amélie, but I have really enjoyed being part of this and playing the music.

Parkway Playhouse, located in the Appalachian town of Burnsville, NC, is a haven of theatre talent. While people come to the mountains to get away, Parkway Playhouse is a natural gathering place to connect. Likewise, we are an extension of traditional mountain talents: singing, dancing, and, foremost, storytelling. By giving rise to energetic new voices and through a wide variety of plays and musicals, we invite our audience into experiences that are thought-provoking, adventurous, and entertaining. Together we reimagine the world in every live performance, creating dynamic conversations that last far beyond the curtain call. This blog is will feature stories, helpful information, insight and features about the performances. View all posts by parkwayplayhouse